My starting point was the recipe shown in this video: youtube.com/watch?v=YR5Giafbi1s. However, after a few attempts, I noticed two problems. First, the result of the dark chocolate recipe was too grainy. Second, and as a result of my attempts to solve the first, dilute the sugar and cocoa powder with water or milk led me to difficulties in keeping the mixture homogeneous.

After some research online, ti seems that this a real problem for homemade chocolate: even the extra fine sugar is grainier than the ideal and the only way to solve this issue is by slowly beating the mixture for long hours. Not satisfied, I decided to play with the quantities and try to use as minimum water as possible to dilute the sugar. After many attempts, it worked! :-)

The procedure and quantities below are the final recipe I am using (enough for 315 grams of dark chocolate).

Melt the cocoa butter over boiling water in a bowl large enough for all the ingredients in the end. Warm the glass that will be used to measure the water. Get 30 grams of boiling water and add to the sugar in a warm bowl, mixing them together to dilute the sugar (this should be done quickly so the water do not cool down). Add this mixture to the melted cocoa butter, keeping them over boiling water. Add the cocoa powder (using a sieve, if available), turn off the heat and mix them to get a very dark and bright mixture.

This mixture would need about 20 minutes to cool down before going into molds and to the fridge. During this time, the ideal would be to keep mixing them gently and continuously. However, this is quite boring and not totally necessary. What I do is stir them for about 10 seconds several times throughout the 20 minutes. This is important to break the sugar particles, to keep the mixture homogeneous and to air it (professionals say this is important for the taste).

I would say that 12 hours in the fridge is enough, but I have never taken this step really seriously. After a couple of hours the mixture is solid enough to be removed from the molds, but I think it still needs some hours to get properly set.

The video below shows how the mixture looks like after about 10 minutes cooling down.

And here it is me pouring it into molds.

The final texture is still a little bit grainy, but the flavor is amazing! Also, remember that this has only 3 ingredients (4 if you count water)!

You can just replace the water with espresso coffee and everything works the same and you will get a bit of a coffee flavor in your chocolate.

Another option that I have tried is vanilla extract (not flavoring), but the I do not think it is worth the cost: the taste and smell is too discrete for me. Maybe I am not using enough, but I do not htink so.

According to my readings tempering (melting and cooling the chocolate repeatedly) could improve the smoothness of the chocolate bar and its resistance to melting. I am still testing, but the results so far are not convincing. So, I do not recommend.

In the section below I give some tips on where to buy the ingredients in Brazil. So, it is written in Portuguese.

This recipe was strongly inspired by the video below.

Carluccio is quite relaxed about the recipe, that is why I calibrated it a little bit after some attempts. I have to say, my favorite part of this desert is to prepare it after the main dish, right before eating it, seating at the table, talking...

The ingredients below are for 2 people.

For preparation, follow the video above. There are some alternative for Savoiardi biscuits, but this is actually the best option for this recipe.

Bakewell tart can be seen as a cake on a tart base or as a tart with a topping that looks like a cake. Anyway, it is delicious. Maybe too heavy for a desert, but perfect to accompany coffee or tea.

Ingredients for the Shortbread Base:

Ingredients for the Topping:

For the shortbread base: combine all the ingredients, except the jams, in a food processor and blitz until the mixture has just come together into a ball. Press (do not exaggerate) the pastry evenly into the prepared pan. Bake for 20 minutes and remove from the oven.

Turn the temperature down to 165° C. Let the base cool for 10 minutes. Gently spread the jam over the pastry. Stop before the edges, so the jam does not come off when you put the topping.

For the topping: beat the butter and sugar with a electric mixer. Once creamy, add the eggs and beat well. Mix the ground almonds, flour and baking powder in a bowl and then fold in the mixture in the liquid mixture. Add the vanilla paste and mix. Spread this over the jam evenly and sprinkle with flaked almonds. Return to the oven for 45 minutes or until golden and set.

Cool before slicing and serving. It serves 5 people for a afternoon tea (2 fingers, as in the photo above, each).

The recipe above was adapted (reduced and slightly changed for my taste) from kitchenlioness.blogspot.co.uk/2016/04/bakewell-tart-fingers-by-londons.html and it was originally published in a book by Claire Ptak, owner of Violet Bakery in London. I had the chance of eating her bakewell tart fingers at the street market in London and that is the reason I tried this recipe for the first time. It was delicious! I do recommend it.

This recipe started with the recipe published by escabeche on the Nottingham Cookbook and suffered a lot of changes until this version, the first one I am really satisfied with.

I love the idea of a spanish croquetas: small fried breaded bits of an almost gooey filling with small pieces of something very tasty, like jamon or some strong cheese. (I do not buy the pollo version) 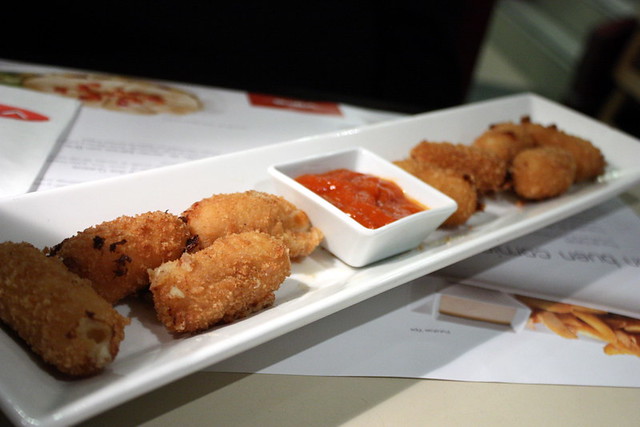 This recipe is for jamon and cheese croquetas and, as most of my recipes, is adjusted for a small portion. In this case, enough for 8 small croquetas which, in my opinion, is a good ammount for a starter for two.

Warm the milk on low heat and add the onion, garlic and jalapeno. Leave it to infuse for 20 minutes keeping the temperature warm using as low fire as possible.

Strain the mixture and save both parts.

Melt the butter in a pan and the the flour slowly, stirring, in order to make a roux. Slowly add the liquid part of the previous mixture, mixing them well.

When it becomes a smooth and uniform dough add the mustard, cheese, ham, salt and the solid part from your strain, one at a time always mixing them together.

Spread the mixture in a plate, cover with foil and bring to the fridge to cool down for about 30 minutes.

Then, make small balls with the dough, pass them on flour, then on eggs and finally on breadcrumbs. Ibeally, they should be fried by immersion, but you can also do it with less oil (covering the balls at least to the middle) and turning them often.